In the run-up to formal approval for the Bell-Boeing V-22 Osprey, the American military workhorse tilt-rotor aircraft, I was charged with creating images that would show the capabilities of the one-of-its-kind hybrid helicopter-jet. The military had experienced some difficulties mastering the innovative craft—designed to function as a helicopter as well as a long-range, high-speed turboprop jet—but it had been redesigned and rebuilt and the push was on to gain Congressional approval for full production.
The challenge of the assignment was that my team’s access to the aircrafts, of which only a few prototypes were available at the time, was very limited. We had a to shoot the aircrafts overnight on a military base, from 11 p.m. to 6 a.m. daily, because they were either out for testing or being worked on during the day. We then shot them on their training runs as the sun came up. In the images that I created, I had the aircrafts straddling the hanger (on the left), where they were being tested and worked on, and the field situations that they were being used in (on the right). I was so impressed by the machine and what it could do that I created an art piece titled, Rescue at Sea. 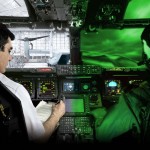 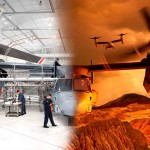 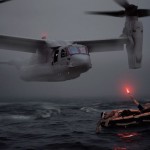